How to provide an update to my gentle readers, those of you who hang upon my every dulcet word?  I know I haven’t been posting, and if you don’t want to be bummed out you might not want to read this one.  Fair warning.

Like the rest of North America, manners and civility are much on my mind thanks to an overdose of Downton Abbey.  Never mind, my dear, we all shall muddle through.  Muddling is pretty much all I ever manage, and especially so over the past month.

I’ll spare you the garden-variety whining about winter.  Canada has admirable universal health-care, a degree of gun control, a tolerant and mostly-secular society, and is in a whole bunch of ways an excellent place to live … and winter is just the trade-off.  So be it.  I’ve been through enough of them to know that winter eventually ends, and unlike a lot of people who get very depressed in February, I tend to look at it as the light at the end of the tunnel.  (It’s November that really gets me down.)

My difficulty with generating any witticisms stems from a more sober realization I had to make a few weeks back. 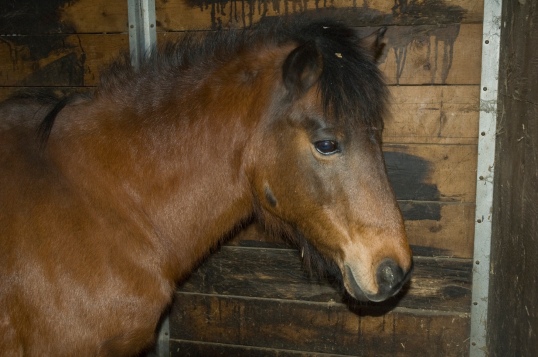 I had a lovely pony mare.

She came with the name Nysa, but that always sounded to me like a bad straight-to-video Disney heroine, so she was nicknamed Trouble (because she was, you know, a pony) and it gradually became her true name.  Despite that, she was actually the least evil pony I’ve ever met — a gentle little bay Hackney/Shetland cross, just 11:3 hands, who had been abused in her early life (I never understood just what sort of asshat would feel compelled to thump on such a petite creature) and needed a home.   She was so squirrely when we first met that I could barely get a hand on her … but as she learned to trust me, I discovered she was canny and clever, great with kids, and an exceptional nanny pony for the two weanlings I (she) have raised.  She was patient and tolerant with each of them up to a point, but she never hesitated to teach them some manners when necessary, a quality I admired in her very much.  Neither Spike nor Parker would be half as nice a horse today were it not for her tough love.

Trouble was also a holy terror with dogs.  They never invaded her space more than once.  I once saw her bowl over a 150 lb. Newf who was foolish enough to venture into her territory.  The Newf, who had never been one to learn lessons the first time, was uninjured but absorbed a whole new respect for equines that day.

Trouble was never much more than green-broke, through no fault of her own — it’s just that her Hackney blood made her a hot little thing, and I never found a hotshot kid who was small enough, and could stick well enough, to get her going properly.  They grow kids at such a size these days, by the time they have the skills to ride something like Trouble, they’re six feet tall.  It’s a shame, because I always suspected she would jump like a little stag.  (Most Hackneys can.)  I did try to get her going as a driving pony, but we had an Unfortunate Incident on the day we first soloed with the cart.  Okay, a trainwreck.  My neighbour let loose his dog, who ran right under poor Trouble’s feet while she was trying rather nervously to concentrate on pulling my little Greenhawk breaking cart … and let’s just say it didn’t end well.  She never quite recovered, and neither did the cart.

I may have mentioned that she had issues with dogs.

There are so many more stories I could tell you about Trouble; we were together 13 years and there were lots of them.  She was lion-hearted enough to stand up to Toddy’s initial hostility (and 16:3 hands of copper Thoroughbred bearing down on you with ears laced back and teeth bared would have put the fear of god into most ponies — but she just dipped and dodged across the pasture and stayed just out of reach of those teeth till he relented).  She was the consummate babysitter for any horse on stall rest, accepting that she had to be incarcerated in the adjacent stall, until company was no longer necessary.   She knew her job and did it with quiet competence.  And she was absolutely the perfect size for hugging.

Like most ponies, Trouble was a case of laminitis looking for a time to happen, and eventually, it did, despite all my best efforts:  thyroid meds which sped up her metabolism, to some degree, and a grazing muzzle to limit her access to grass (which only worked until she managed to ditch it, and she was very, very skilled at ditching it).  Also like most ponies, Trouble was as tough as nails, and she bounced back from each episode with her usual determination.  We sort of fell into a routine of, uh-oh, ouchy feet again, better incarcerate her in a stall and put her on bute and give her a couple of weeks, and then she’ll be back to normal.  And for 10 years or more, that was our reality, Trouble and I, and neither of us minded all that much because she always bounced back.

Until she didn’t.  Chronic laminitis is not something you cure, as a rule.  With each episode, there’s a little more damage to the laminae, the fringey, frondy tissues that attach the interior of the hoof wall to the bony structures inside the foot.  And there comes a point of no return.

Trouble reached that point this fall.  Weeks came and went with no improvement, and as we wore on into January I could see that her toughness was wearing thin.  Above all, laminitis is a miserable, painful thing, and after years of being stoic and relentlessly cheerful, Trouble was finally starting to look weary, stressed, and drawn.  I kept hoping she would rally.  When we had the first decent snowstorm of the season, I was delighted, because it meant that she could be turned out in a small paddock and be knee-deep in snow, which frankly had always been the most therapeutic thing I could do for her feet. The constant cold always relieved her discomfort and  made winter her best season … and with no worries about grass overload she generally had a comfortable few months without the accursed grazing muzzle.

But this time, the snow made no difference.  Neither did the inadvisably high doses of bute she’d been on.  And I knew it was time.

The horror of putting a horse down in the winter, in this part of the world anyway, is that there’s not much prospect of giving them a dignified burial, what with the ground frozen.  Instead I was faced with calling the ‘deadstock guys’.  It’s a call I’ve had to make once before, and I’ll just say this:  if you never have to make that call yourself for one of your animals, count your blessings.

And I don’t want to go over all the wretchedness of the whole thing, but at the risk of going into TMI territory I will say that of course Trouble came out of her stall that afternoon more cheerful and willing to walk on those poor feet of hers than she had in weeks.  Because, of course, that’s what they do when you’ve made the decision.  She also did not go gentle into that good night.  It took three doses of what the vets still call ‘blue juice’ (though it hasn’t been blue in ages) to finally stop her heart, and it was pretty much the most awful, awful euthanasia I have had to witness.   I’m not blaming my veterinarian, because I know there’s always a possibility that an animal won’t respond to the usual dosage in the usual way.  But still, she didn’t deserve so drawn-out a death.

It’s part of what we sign up for, when we take these critters into our lives.  Mind you, I have friends who have gone miles out of their way to shirk that responsibility — to the point of giving away geriatric horses who have served them unbelievably well, to people they don’t even know, just to spare themselves the discomfort of having to put them down one day.  I don’t have a lot of respect for that.

And I’m grateful that we at least have the option of a kind death for our animals.  We don’t yet have that right for our fellow humans (though I hope that Canada will arrive at it eventually, probably long before the United States does), and that makes you ponder the whole meaning of the word ‘humane’.

But still, I’m verklempt and probably will be for some time.  Hell, I have critters who’ve been gone for 10 years that I can’t mention without my voice shaking.  I don’t buy into the Rainbow Bridge nonsense any more than I buy into the Pearly Gates, and I don’t expect to see Trouble again, so please, no platitudes of that nature if you comment.  But I hope I will always be able to remember the particular quality of her nicker, the way that unruly pony mane flopped over to the left side of her neck no matter what I did to try to train it otherwise, her pony kisses, and how she would curl up her tongue and suck on it after she’d had a sip of water — it was the cutest damn thing and I’ve never seen another horse do it quite like that.

In a way, Trouble donated her organs, which is also some solace.  I asked my farrier whether she could contribute to laminitis education in some way, and he was very keen to assist.  Not to put too fine a point on it … after her death, he arrived as promised to harvest her front feet, which he is freeze-drying to serve as teaching tools.  One in vertical cross-section, the other in horizontal slices, demonstrating the anatomy of the disease.  There was no way I could stay there for the harvesting — I excused myself and went to the library, coward that I am —  but I think I will want to see the end result when they’re ready.  I’ve seen freeze-dried limbs before and they are fascinating, but I’ve never held one in my hand that came from a horse I knew and loved.  Wish me a little intestinal fortitude on that one.