Archive for the tag “winter in Ontario”

Survival of the Stupidest

Last winter, we here in Ontario got off comparatively lightly.  It didn’t snow in any sort of serious way until after Xmas.

I knew we were gonna pay for that.

This year, my farm got hit with the first big snowstorm — completely un-forecast by The Weather Network and similar geniuses (just sayin’) — in mid-November.  Which is simply not kosher.  And I’m talking an honest-to-gawd 50 cm worth — over the tops of my boots and up to my knees in spots.  A week later, another 30 cm.

As much as it’s part of the Canadian identity to pride oneself on one’s hardiness (and ability to steer out of a skid on black ice without ever having to put one’s double-double back in the cup holder) — and as much as we can’t help sniggering uncontrollably whenever we see news footage of civilization grinding to a halt as soon as there’s a dusting of white stuff on some American road (because pfffffttt, amateurs!) — the truth is that all the riders I know ’round here who can afford to, pack up house, horses, and hounds, and head to Aiken or Ocala for the winter months.

Hey, it’s only four (cough) months of hellish horsekeeping.  How bad could it get?

(Truth be told, politics and religion have gotten so polarized and just plain creepy in the States that I wouldn’t set up shop there even if I could.  Fundamentalism weirds me out.  But I digress.)

Eight short weeks ago, Spike and I were competing at the fall Grandview Horse Trials, where we successfully upgraded to Pre-Training (go on, admit it, you’re impressed).  Considering it was accomplished in a biblical deluge, I was actually pretty impressed with us, especially Spike, who had never had to do a dressage test or jump in conditions like that.   The warm-up rings were literally under water, the competition areas no better, the heavens were just relentless, and while the cross-country course footing at Grandview is superlative, even it can only take so much.  Young Master Spike squelched around in his usual unflappable, good-natured way (my previous partner, Toddy, hated heavy rain with a passion and probably would have flattened his ears to his head

and said, ‘Hell no, you crazy woman’), jumped clean in both stadium and cross-country despite the fences being a bit bigger than he’d been used to, and brought home a seventh-place ribbon, which under the circumstances was nothing to sneeze at.

He also demonstrated to me some hitherto-undiscovered scope — otherwise known as HOLY SHIT! fences.  There were two obstacles on cross-country where he clearly didn’t much like the look of the chopped-up footing at the base, so he simply left out a stride (or, um, five) and launched himself skyward.  Now, while my cardiovascular system could do without that kind of excitement, it did indicate that Spike’s been hiding his light under a bushel to some extent, and that’s useful information for the future, when the fences actually begin to require that sort of power.  Spike’s the type of horse who always seems to be at the limit of his athletic abilities, and then surprises you by kicking it up a notch … my personal little Stealth Bomber.  So there was that.  Overall, it was as positive an experience as I could have asked for considering the rain never let up for two fricking minutes, and I’m feeling good about going out at Pre-Training in the spring and upgrading to Training before the end of the season.

So that was eight weeks ago.  Eight weeks.  And now my semi-sleek event horse looks like a yak, Parker has already shredded three blankets (not on himself, but on his filly friend, two-year-old Trixie, because he appears to get off on the sound of ripping fabric), my metabolism has bottomed out and is packing on the pounds just in case this is the next Ice Age, and it’s abundantly clear that this is going to be one long sunuvabitch of a winter.

There are some tricks of the trade, when it comes to winter horsekeeping in Ontario.  (Yeah, I know, I’m probably going to hear

from some folks in Edmonton, or Yellowknife, telling me I’ve got it ridiculously easy.  Winter one-upmanship is also part and parcel of the Canadian identity.)  I’ve actually been compiling ideas about winter stable management for about a decade now, because there’s a half-formed idea in my head to write a book called Northern Horsekeeping.  If you gentle readers think you’d actually purchase such a book, leave me a comment to that effect and maybe I’ll get motivated to get off my ass and finally pull that proposal and sample chapters together and send it off to some publishers …

Given that this nebulous book concept is still floating around my cranium, I probably shouldn’t give away all the best ideas in a blog post, but here are some random survival strategies for getting through four (or more) months of frost-bitten misery:

1. Designate your biggest, ugliest, heaviest winter coat the Barn Coat.  By the middle of the season it will completely reek, so designate another the Being Seen in Public Coat and keep it away from the barn.

2. The layering thing:  pretty obvious.  The tricky part:  finding layers you can still move well enough in to a) muck stalls, drag hoses, schlep hay, and b) actually ride.  These two requirements are vastly different.  The boots and gloves you wear for chores will be way too bulky to ride in, and probably so will the coat, so have stuff to transition into when you get on a horse.  At which point it becomes a race to see whether your toes give out first, or  your fingers.

3.  Frozen leadshanks.  Leave ’em out hanging on the gate and you will inevitably have to deal with this.  You can thaw the snaps by sacrificing precious hand warmth, but ain’t nothing to be done about the fact that it’s going to be like leading your horse with a broom handle instead of a rope.

4.  Hot Shots:  those little chemical packets which are supposed to heat up when you shake them, and can be tucked inside your mitts and boots and pockets.  Buy many.  They’re useful — when they actually work (which is something of a crapshoot).

5. Snowmobile sleds are your friend.  These are like toboggans on steroids, with high sides, and they’re heavy and rather expensive, but sturdy and can hold a couple of bales of hay per trip.  Beats the hell out of trying to push a wheelbarrow through the drifts.  Canadian Tire puts them on sale at the beginning of the season.

6.  Absolutely no Canadian barn should be without a hot water heater.  They’re not that expensive to install, people, and you can’t even imagine the ways in which even a little hot water is useful from December to March (and often beyond).

7.  There has to be some fitness benefit to slogging through snowdrifts in 15 kg Frankenstein boots.  There just has to be.

8. Why doesn’t anyone sell (women’s) Frankenstein boots that are actually tall enough to slog through those snowdrifts in?

9.  As confirmed on another blog recently:  when filling troughs and buckets, you need at least three pairs of gloves on the go.  One waterproof pair for wrassling the hoses, a second pair to switch to when the first pair gets soaked and freezes solid, and a third pair of regular gloves to resort to after all that nastiness is (temporarily) taken care of.

11.  Ways to keep from freezing while in the saddle:  a) forego the metal stirrups and put cheap wooden Western ones on your leathers, or just ride a lot without stirrups (good for the circulation).  Thaw fingers by tucking them between nice fuzzy horse and saddlepad on a regular basis.  What’s a 1200 lb. beast good for if not sharing body heat?

13.  Beware the dismount.  OMFG it hurts when your feet are frozen. 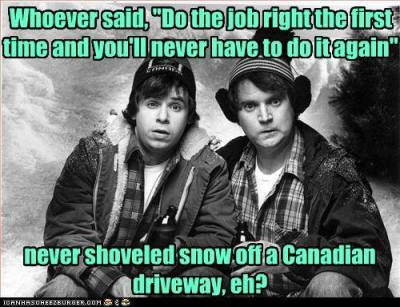 14.  Designate a cheap, washable scarf the barn scarf.  Its purpose is two-fold:  to keep your face from freezing as you bring horses in out of the latest blizzard, and to breathe through when you’re mucking stalls.  Frozen manure makes for simplified mucking, in a way (you can easily find the shitballs you’ve missed because they feel like hockey pucks under your feet, even through the Frankenstein boots and three pairs of socks), but also makes for very dusty bedding.  Scarf warning:  make sure the ends tuck safely into your jacket when riding or working around the beasties.  Parker tried to throttle me last year.

15.  You know you’re Canadian when you’ve mastered leading a horse while wearing snowshoes.  Bonus points if you can lead two.

16.  Hoses are from hell.  Frozen hoses, ninth circle of hell.

17.  Options for dealing with frozen water hydrants:  a) hair dryer; b) the hot water dump (see #6, above); c) the boiling water dump (best to have two working kettles on hand at all times);  and d) the little propane torch that once lived in your kitchen and had only one function, to caramelize the sugar on your creme brulee.   Like that’s ever gonna happen again.  Try not to set the barn on fire.

18.  Horses do not feel the cold as acutely as we do.  Duh.  They’re not nekkid.  And they originated on the frozen steppes, not in the desert.  So don’t judge their discomfort by your own.  And don’t get stupid about the number of blankets you pile on them.  They really would rather not be trussed up like the Christmas goose.

20.  Sometimes the only way to thaw out properly is to throw yourself into a scalding hot bath.  Though red wine and dark chocolate are also forces for good.

And here are a few of the notions that keep me in Ontario when it’s bleakest:

1. Frozen everything means no worms, and no need to deworm, for at least four months.

2. Ditto mosquitoes and mosquito-borne diseases.  We don’t have to vaccinate for West Nile or EEE year-round.

6.  Lots of good grazing (well, for six months of the year, anyway) and good hay the rest of the time.  Some places would kill for our hay.

7.  Fuzzy horses are kinda cute and Gund-like and pettable.

8.  Sometimes, it’s actually really nice and soul-restorative to go for a boogie in the snow.  Sometimes.

Right now, I’m trying to focus on the upcoming winter solstice, after which the days start getting longer and I might start to enjoy enough daylight again to actually complete all the bloody barn chores that take six times as long to do in winter.  So in that spirit: Happy Solstice.  And cheers.