Archive for the tag “hunting traditions”

A-Hunting We Have Went

Several months after the fact, I’m finally getting around to sharing this little factoid:  Young Master Spike can now add foxhunting to his resume of experiences.

Hunting and eventing are a fairly easy fit together.  An event horse is usually already a) fit enough to cope with being out with the hunt for three to five hours, b) accustomed to galloping over open ground and uneven footing, c) trained to jump pretty much anything in his path, and d) won’t lose his marbles over the prospect of being (gasp) outdoors in nasty weather.  The traditional approach is that hunting teaches all these things which later translate well to eventing competition, but with Spike, I needed to take the opposite approach.  Only when he was eventing fairly successfully did I start to feel like perhaps he was capable of going out in the hunt field and not getting us both killed.

See, in his youth Spike was a bit of a space cadet.  Not in a bad way, exactly.  He just tended to be a smidge inattentive.  Didn’t always register where he was putting his feet.  Blundered in, cheerfully oblivious, where angels feared to tread.  It’s taken him ages to hone his attention span, but lots of hacking, some actual eventing, and a dash of endurance riding last summer (that’s a tale for another blog post) finally convinced me that he was ready to cope with riding to hounds.  And that’s rather a nice thing, because I hadn’t been hunting since, oh, sometime in the early 1990s, and while it’s never been the main focus of my riding (cough) career, such as it is, I do enjoy hunting’s unique set of challenges:  riding in company (a test of your horse’s manners, and, I suppose, your own), handling whatever sort of terrain is thrown at you, potentially getting the adrenaline rush of

actually galloping after quarry.  Even observing all of hunting’s rather quaint and arcane rules:  it’s fun to wallow in that tradition, as generations of riders around the world before me have done.

Also, the pageantry of the whole thing is honest-to-gawd stirring.  In my humble opinion, there are few things as gorgeous in this world as a field of bays and grays and chestnuts, the hunt staff in their scarlet, and sleek foxhounds spreading out over a fall landscape.  Seriously, it’s just a stunning thing to witness (which is probably why every fake English pub in North America is adorned with fake Victorian hunting prints), and even more so when you’re playing your part in the panto.

I guess here is where the paragraph defending the barbarism of foxhunting needs to go.  Or maybe we could take it as read, gentle readers??  Here’s my take on the moral turpitude, unspeakable-in-pursuit-of-uneatable, argument (short version):  the Canadian brand of foxhunting is either drag-hunting (as in, only the fake scent of a fox’s urine was harmed in the making of this sport), or, if it’s “live”, the intent is to have a merry chase and then call the hounds off so we can chase the critter — whether fox or coyote — again the following week.  We’re not so well supplied with foxes, in particular, in Ontario that we can afford to do them in on a regular basis, and the business is more about

sport these days here than about exterminating vermin on behalf of the local landowners.  Not that I don’t agree that said vermin probably has the flaming christ on a cracker scared out of itself while fleeing a pack of baying foxhounds, but unless it’s terminally stupid and gets itself cornered, it’s going to live to see dinner, and thus my conscience is fairly clear, cruelty-wise.

That’s my story and I’m sticking to it.  Should you disagree, please feel free to tell me I’m morally and ethically bankrupt, utterly revolting, and probably in favour of poisoning the earth with GMO crops and chemtrails, in the comments below. Because, you know, she with the most comments wins.

Besides, she added not at all defensively, many a time when foxhunting, you encounter no quarry at all.  It ends up being several hours of trotting from cornfield to cornfield, standing around a while in each while the hounds are cast and then reeled in by the huntsman, with a certain amount of passing the flask around.  Followed by a big potluck meal.  And really, what’s to complain about there?

The last horse I hunted was my big chestnut gelding, Sweeney Todd, who had been a reasonably successful racehorse yonks ago, before I introduced him to eventing.  He had more gallop and jump in him than I ever knew what to do with, thought the coops in the hunt field were childsplay (to be fair, Canadian foxhunters rarely encounter anything bigger than a metre tall; it’s not the death-defying version of hunting they have in Ireland, with those five-foot blind hedges and stone walls all over the damn place), and never quite understood the concept of guests staying conservatively and politely at the back of the field.  One of the cardinal sins of foxhunting is to pass the Master of Foxhounds (MFH), He or She Who Controls the Field (the “field” being the average schmoes following the hounds for a fee, as opposed to those employed to do so).  Passing the Master is simply Not Done.  And Toddy and I never did it … but only by virtue of my cramming Toddy`s firebreathing nostrils up the Master’s horse’s 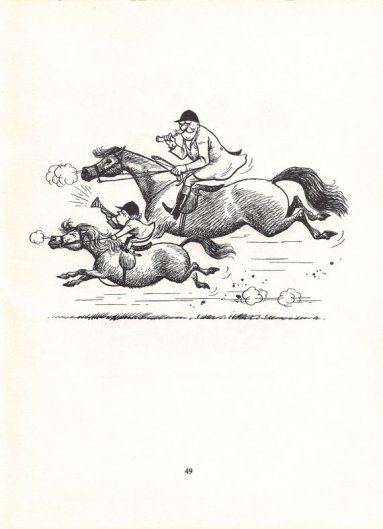 ass on a number of occasions.  The bit has not yet been designed that would have made a difference once the field got galloping.  As far as Toddy was concerned, the whole experience was a track flashback, avec canines … but in his defence, he was otherwise wonderful out there.  He was one of the most intelligent critters I’ve ever had the privilege of sitting on, and remarkably focused on self-preservation.  That, combined with extraordinary balance and nimbleness for his size, made him sure-footed and safe out there and I trusted him with my life.

I knew built-for-comfort-not-for-speed Spike would be a horse of a different colour.  He is a Thoroughbred, all appearances to the contrary, but never having gone to the track, he has no competitive instinct to speak of.  Getting to the front of the field is not something that would ever cross his mind, and he’s never needed anything stronger than a Dr. Bristol snaffle on cross-country. Spike is probably not Toddy’s intellectual equal, but he’s also not the obstreperous bastard that Toddy could be, and his congeniality, I figured, would be an asset when it came to standing around in cornfields with a bunch of other horses he’d never met before.  He’s reasonably good at handling his feet now, is pretty unflappable, and he’s solid as a brick shithouse, which is a useful quality for a hunt horse (horses with matchsticks for legs aren’t typically the best choice in questionable, mucky terrain, which it’s very likely you will encounter in late fall in Ontario).

The biggest question, really, was how Spike would react to the sight and sound of hounds.  This isn’t really something you can prepare a horse for ahead of time.  Sure, you can ask your neighbour to let her Schnauzerdoodle loose, I guess, but 12 couple of foxhounds is another matter entirely.  (Um, for the uninitiated, one always describes the hounds as “hounds”, 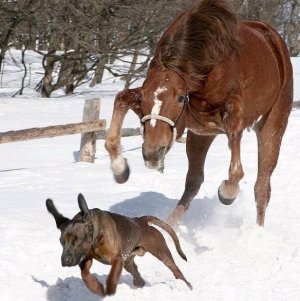 never never never as dogs, and they are always counted in pairs.  Twelve couple is 24 hounds; some hunts use more, some less, depending on the day — it’s the huntsman’s call.  Not sure why the couple thing; it is Written, as they say.)  Anyway, when hound music (um, that’s when they all start baying and howling at the same time, as when they find a scent) starts up, it can be unnerving for some horses, as can the sudden appearance of a working hound from out of the brush and right under their legs, which happens regularly.  And if there’s one Cardinal Sin worse than passing the Master, it’s your horse kicking or stepping on a hound.  That, my friend, will force you to hang your head in utter disgrace forevermore.

So I’m pleased to report that while Young Master Spike did, indeed, find hounds darting under his nose and his heels rather unnerving at first — and at one point raised a front foot as if he were considering teaching the cheeky buggers a lesson — he was very obedient about putting down said hoof when I growled at him, and subsequently earned himself a gold star for rookie hound manners.  He stood politely at the checks (okay, I had to circle him a bit at first), pulled my arms out of their sockets only occasionally (and stopped when I reminded him of his balance and his manners by asking for a few steps of shoulder-in), and dutifully put his head down and kept trotting when we were hit by periodic bouts of (ugh) sleet.  At one point, we were even encouraged by the hunt secretary to keep up with the field a little more closely!  Now that’s something that never would have happened with Toddy …

Alas, the territory we were hunting that day in November was a new one for the hunt club, and there was not a single coop to jump.  So I can’t really report on Spike’s manners in that situation (past experience tells me that you often have to line up, single file, to jump such obstacles in the hunt field, which can lead to a certain amount of hysteria with some horses).  He did, however, comport himself with honour when we found ourselves booking it across an open field in pursuit of a lone coyote and a lone hound (not sure where the rest of the pack had buggered off to!).  Viewing the quarry is considered something of a rare bit of luck, and we indeed had a lovely view as we plunged across a hayfield, more or less keeping up with the field, though to be honest I was more concerned with scanning the ground for groundhog holes (of which there were several) than admiring the critter’s retreating fur.

The coyote gave us the slip, the sleet got heavier (though hunting does at least convince you that wearing a black wool

riding jacket isn’t always utterly impractical), and when the majority of the field said, “Want. Hot. Beverage.”, Spike and I concurred and headed back for my trailer, while the hunt staff turned the other direction to gather up the scattered hounds.

We didn’t stay for the hunt breakfast, as I wasn’t confident about leaving Spike alone in the trailer in a parking lot … that’s something that we’ll have to practice, aided considerably by the fact that I managed over the winter to acquire a larger trailer with a box stall arrangement in front for his comfort and convenience.  Next year, we’ll partake. But overall, we didn’t disgrace ourselves.  Spike didn’t set the world on fire, but he was Mr. Congeniality and that, in my humble opinion, makes him worth his weight in gold.

Many thanks to the Toronto and North York Hunt (the second-oldest hunt in North America, by the by) for the invitation to hunt as a guest; I look forward to joining you again.  Now that I have a bonafide hunt horse.