Archive for the tag “cross-country”

Far be it from me to ignore a challenge.  Well, okay.  I do occasionally ignore challenges … only so many hours in the day, and I’m edging towards an advanced state of decrepitude, after all, and I’m way behind on blog posts about the Toronto Pan Am Games already, and besides, you think all these excuses just spring from the firmament fully formed?  This kind of carefully crafted obfuscation takes time and effort, people.

But my good friend (and far, far more consistent blogger than I), Katherine Walcott, over at Rodney’s Saga, tossed out a request to describe the best class I ever had at a horse show.  So I’m going to reach a bit into the pre-Cambrian era (or, at least, pre-Spike) and tell you what I remember, rose-tinted though it may be.  Cuz apparently, it’s a thing to do if you blog.  Creates traffic and all that.

So. Once upon a time.  I had a big lanky chestnut Thoroughbred gelding who was an obstreperous bastard and my horse of a lifetime.  That his show name was Sweeney Todd ought to tell you a little about him … he went through life with his ears permanently pinned, but OMFG, he had more run and jump in him than I ever knew what to do with.  Transforming him from a malcontent racehorse into an event horse took every ounce of persuasive ability I could muster, a willful ignorance of the peril he semi-regularly put me in, and the approximate weight of a Buick Skylark in bulk-food-store Scotch mints, but we did forge a productive partnership eventually — and he was a nice enough horse that several Big Name Riders noticed him.  (And went out of their way to tell me I was wasting a talented animal and ought to pass him over to someone who could do him justice, but whatever.)

Please can I have just a little peril?

Toddy had a highly developed sense of self-preservation and that “fifth leg” (no innuendo intended) that a really intelligent and athletic horse has; I trusted him implicitly on cross-country, and he got me around some Preliminary-sized courses I probably had no business getting around.  He remains the only horse I’ve ever had who probably could have gone Advanced — had I had more money, more time, and the talent to match his.  But as it was, with a limited supply of all of the above, we did reasonably well at the Preliminary level in Ontario in the early 1990s.  And then I took a job managing a riding school in Bermuda for a year, and leased Toddy out at the height of his eventing career.  (Looking back, not sure that was the smartest thing to do …)

So.  The job turned out to be a bit of a trainwreck, and I returned to Ontario pretty much penniless and had to regroup for a while.  The resumption of Toddy’s career took more time than I would have liked.  He was 15 before I managed to get back 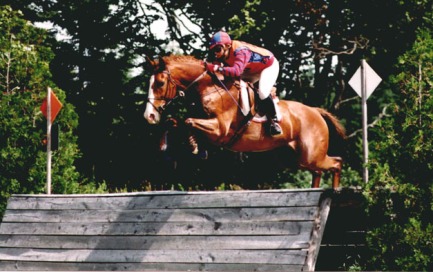 in a position to show again.  I’d realized by then that an upgrade to Intermediate was probably not in the cards, but I did have another bucket list item on the agenda:  doing a full-on three-day event.  We’d never managed to fit one in prior to my semi-tropical hiatus, and I knew if I dithered too much longer, it wasn’t gonna happen.

This was shortly before the “long format” three-day event became extinct, and the Ontario Horse Trials Association used to make a point of offering a Training level three-day event each year as a sort of gentle introduction to dealing with a real three-day (as opposed to the simpler, one-day horse trials format that most amateurs are accustomed to).  “Real” three-days began at the Preliminary level and were FEI-sanctioned, so the Training level three-days were run as clinics, with BNRs talking you through the extra steps:  the two veterinary inspections, the various Phases of cross-country day (does anyone still remember Roads and Tracks and Steeplechase?), the dreaded 10-minute vet box,

the demands of caring for and cooling out your horse after that sort of intensity.

So Toddy did his first — and only, as it turned out — three-day event at the age of 16, passing the jog despite his super-fancy track jewellery, and delivering a mediocre dressage test in the rain the next day.  (He often delivered mediocre dressage tests, not because he couldn’t do the flatwork, but because he held it in disdain and far preferred to embarrass me than to wow the judges. He was the old-fashioned type of event horse who wanted to get on with the running and jumping as soon as possible, please.)

That’s not the “best class” part.  That came the next day, when Toddy trotted around Phase A — the first Roads

and Tracks section — and then came out of the start box on Phase B (steeplechase) monumentally confused.  Ordinarily, one gets a few warm-up cross-country fences before one goes out on course, but at a long-format three-day, you book it straight down to the (substantial) brush fences on steeplechase with no heads-up for your poor beast.  Toddy, three-day virgin that he was, launched himself about five feet in the air over that first 3’3″ brush, with his eyes out on stalks. (Please note my bravery in providing you with photographic evidence of this:  I was not exactly at my slimmest at the time, and between his helicopter effort and my thunder thighs, it ain’t a pretty picture!)  We landed in a bit of a heap, and (with my heart in my throat) I chirped to him to gallop on … and suddenly there were tears streaming from my eyes as the pretty-good-allowance-turf-horse inside my teenaged beast asserted himself, and he realized that pelting like a bat

outta hell at big brush fences was just about.  The BEST. Thing. Ever. EV.  ER.

To this day I don’t think my heart-rate has ever gotten higher; I’m lucky I didn’t stroke out, but I suspect that Toddy would have continued to pack me around even if I had been as limp as a bag of hammers at that point.  I had galloped plenty of racehorses in my youth, but nothing ever felt faster or more terrifying or more fantastic than that two minutes and change on steeplechase, on the most athletic damn horse I ever sat on.  The finish flags were a blur, and it took me one helluva long time to pull him up, but eventually we completed the second Roads and Tracks section and came into the 10-minute box on time and unscathed.  (Good thing they weren’t checking my heartrate in there — it was still pounding like a bunch of demented Kodo drummers, but my shiny metallic chestnut dude was good to go despite the heat.)

The actual cross-country, Phase D, was almost anti-climactic after steeplechase, considering it was a Training level course and thus not all that challenging for Toddy, who’d been running Prelim for years.  My brain stalled out at one point and I wasted a good 20 seconds circling in a field before I remembered where my next jump was, so we ended up with time faults, but I really didn’t give a rat’s ass.  We were clean, Toddy had come through all of it beautifully (especially for an old warrior with osselets and a minor heart murmur), and his legs were cold and as tight as they ever were the next day.  He hadn’t even managed to pull a shoe, which for Toddy, was saying something.

We capped the whole experience the next day with possibly the most perfect stadium round I have ever jumped.  I freely

confess to being a bit of a ‘seat of the pants’ rider.  My eye for a distance is not the greatest, and I’ll routinely flub at least one fence by second-guessing my horse — but on that day, we absolutely nailed it.  I remember cantering down to the final vertical on the course thinking, okay, I’ve managed to get a perfect spot to every fence so far, which never, ever happens … surely I’m going to come down to this last one and fuck it all up.  Instead, I saw the distance, and the distance was good.  It felt amazing.  And I — and maybe the stadium judge, maybe not — was the only one who saw that round.  Because the rain was coming down in absolute sheets, and pretty much everyone else had abandoned ship and was huddled in the indoor arena, some distance away.

To say I was proud of my Grinch that day is a huge, huge understatement.  On top of all of his other little successes that weekend, he was normally a horse who loathed having to compete in the rain.  He’d flatten his ears to his skull and grind his teeth and make it clear that I deserved to burn in hell…. but that day, he put away the ‘tude and pulled out the stops for me.  Never mind that it wasn’t a ‘real’ three-day and it didn’t count for anything of any significance, and never mind that I don’t even remember where we placed.  (Eighth or ninth, I think, thanks to that dressage score and the time faults on Phase D.) It still sticks in my mind as the most awesome show we ever had.

But you’re really going to have to take my word for it.