Archive for the tag “coral reef” 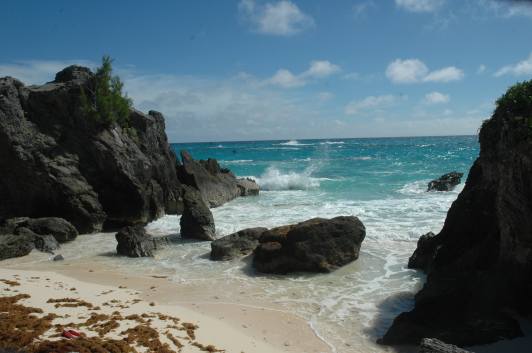 I really had forgotten how much I love the place.

I’ve been lucky enough to have travelled to two places necessitating air travel this year — which is more than I’ve done in ages.  (The flying itself isn’t the lucky part, I hasten to add.  I hate airports as much as I ever did.  Foul, officious, inefficient, sterile, vexing places.)  Thanks to a contest win, I got to rat around Paris for a week back in April, poking my nose into every museum I could navigate to and subsisting on street crepes and croissants (which is a fine form of subsistence if you ask me) before returning to my ridiculously posh hotel room every evening.  I did all the de rigueur stuff: the Eiffel Tower, the Arc de Triomphe, Versailles, a tour boat up the Seine, stealing votive candles from Notre Dame (the ultimately ironic souvenir for an avowed atheist who nonetheless appreciates dramatic architecture, good acoustics, and gargoyles.  OMFG I love gargoyles).

You could send me back to Paris in a heartbeat.  I’m sure I could spend weeks more exploring the city and never get bored.

But there are some places that just get under your skin and worm their way into your soul in a way that even Paris can’t do for me.

A week ago I made my way back to Bermuda for the first time in a decade, a wedding invite clutched in my paw.  Bermuda and I go back a ways … in 1995, between jobs and feeling impoverished and aimless, I took a Bermudian acquaintance up on an offer to manage a little riding school on the island for a year.

Lee Bow Equestrian Centre is (was) in Devonshire, in the middle of the island, not far from the capitol city, Hamilton.  It had a 12-stall barn 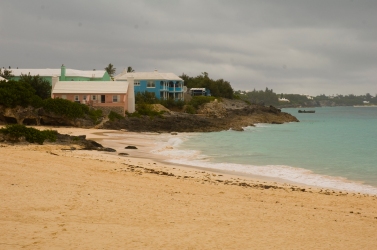 and 16 school horses, a tack room full of cardboard-y World War II era pony saddles in which it was impossible for any child to establish a balanced position, a sand ring with a few jumps, and a clientele which was 80% local kids and 20% obese American tourists who all wanted to go out on trail rides and gallop on the beach.  (Bubble burster:  no horses allowed on the beaches in Bermuda.  Sorry, cowboys, Bermudians like their beaches pristine and manure-free.)

My boss was an asshole of staggering proportions (that’s a whole other blog post), the humidity in July and August was purgatorial (and here I thought I came from a humid part of the world), the roaches were the size of a Buick (funny, not a whisper about those in Fodor’s), I was allergic to some sort of mould in the tack room and my eyes swelled shut for two weeks, and I completely fell in love with Bermuda. 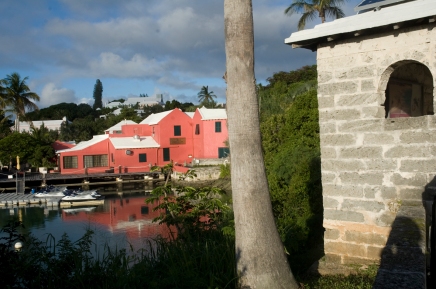 It’s not just the colours, though they’re saturated to the point of almost painful intensity.  Anyone who thinks pastels are kind of a weak, milque-toasty version of reality should spend a day or two tooling around Bermuda on a bike (moped), taking in the hillside groupings of houses in coral, bubblegum pink, turquoise, mint green, and lemon yellow, all with tiered white roofs (which serve as rainwater collectors, since there’s no fresh water on the island).  I’ve often thought that if Canadians took a similar approach, winter might not be so fucking depressing here.

Add to that an array of tropical plants — hibiscus so vigourous they chop it into bloody hedges (while I can barely keep one alive on my windowsill here in the Great White North), intensely poisonous but beautiful oleander bushes in various shades of cerise and white, poinciana trees aflame in the spring, jacaranda and jasmine, banana trees and rosemary that runs wild on the roadsides — and the smell of the ocean … well, hell, it’s sensory overload.

And of course the beaches are legendary.  I never was a ‘beach person’ before Bermuda, but I discovered that’s because Great Lakes 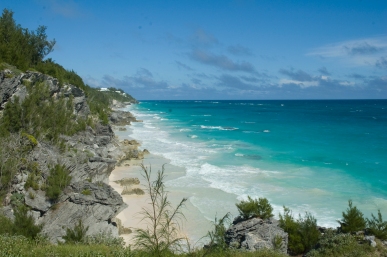 beaches are ugly and the water’s cold and filthy.  Who knew.  A Bermuda beach, in contrast, is all silky pink sand, limestone rock formations, and an impossibly aquamarine sea.  Devoid of filth (and hoof prints) because they actually sweep the beaches on a daily basis.  And you’re never more than half a mile away from one.  Sweet.

Beaches alone don’t tend to hold my interest indefinitely, but fortunately Bermuda’s also pretty fascinating from a historical perspective.  With a colonization history dating back to the mid-1500s (initially, the Portuguese; the island was uninhabited prior to their arrival, so no indigenous peoples to squash and/or subjugate), and a number of very hysterical buildings several centuries old, there’s a fair bit to explore.  Also, forts.  Lots of ’em, all built at various times to defend the island’s strategic position out there on its own in the Atlantic, and well-preserved because, as it turns out, none of them were ever shot upon.

I could go on.  Suffice to say that some of the things I learned to love about Bermuda were:

* a summer that actually lasts long enough for you to settle in and get comfortable in it.  Canadians are a bit frantic about summer.  We have to try to cram all our summer stuff into eight short weekends, and so all the good stuff ends up in scheduling conflicts and we never really feel like we got our money’s worth.  In Bermuda, the temps are still warm and lazy in October, you can still stretch out on the beach and fry yourself, and socks aren’t really required till Christmas.

* zipping around the island on a bike — which is what the vast majority of people do.  Yes, there are cars (for locals only), taxis, buses, and small lorries of various configurations, but most of the traffic is of the two-wheeled persuasion.  The roads are narrow, winding, and sometimes steep, the speed limit is 40km/h, and while the tourist bikes are gutless 50cc pieces of shit, they are still way fun and make me hanker for a Vespa every time I come home.

* being out on the reef.  The first time I ever went snorkeling was in Bermuda, which is completely ringed by coral reef, not to mention about 800 shipwrecks resulting from people not navigating those reefs all that well.  (To be fair, the navigation remains bloody tricky.)   I was about 2 km offshore and the water was barely 10 metres deep … I remember ducking under the surface and thinking, “Whoa.  Fuck horses.  I’m just gonna spend the rest of my life with my face in the water and my ass in the air, looking at corals and pretty fish.”  Again, my native Great Lakes, by comparison, suck:  gimme a rainbow parrot fish over a lamprey or a diseased perch, any day.

* tree frogs.  These are petite little amphibians, not a lot bigger than your thumbnail, who peep incessantly all night.  Tourists find them distracting.  It’s possible I did too, the first week I was in Bermuda.  Every time I’ve returned, they have put me to sleep with a stupid smirk on my face. 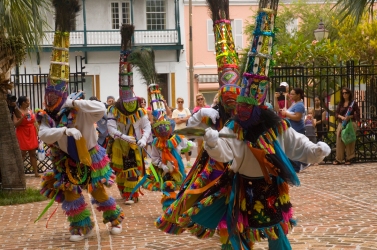 The great thing?  All that stuff is still there.  With a few exceptions (the loss of that most venerable of Bermuda department stores, Trimingham’s, among them), the whole island has apparently been in a time warp since I was last there in 2003.  Of course I already knew that very little gets wiped out in Bermuda thanks to hurricanes — it’s not that the hurricanes don’t hit, because they bloody well do, but Bermudians figured out centuries ago that houses made of limestone (or, these days, cement blocks) generally don’t go anywhere even in gale-force winds.  Still, I was surprised how many of my favourite restaurants and little haunts were unchanged apart from the prices.

I only had five days on the island this time.  It wasn’t nearly enough.  But I figure I’m going to start lobbying my connections at the Bermuda Equestrian Federation to bring me down there next year as a schooling show judge.  There’s no way I’m leaving it another decade.