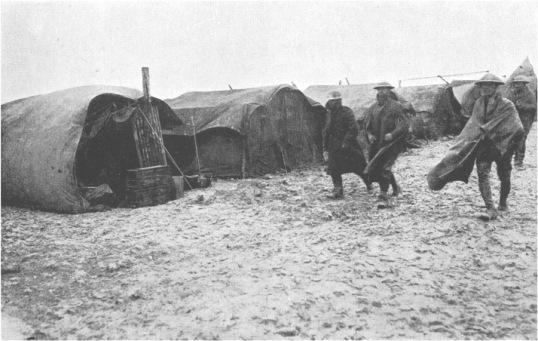 I promised I was going to usher you into the mysterious unseen world of the horse show press tent, right?

That’s assuming, of course, that there actually is one.

Over the past 15 years or so, I have experienced many levels of media preparedness on the part of horse shows.  Rarely sublime, often ridiculous.  Of course, the general level of making-life-easy-for-journalists has improved vastly with the advent of wi-fi.  (Look, contact with the outside world — oh, bliss!)

But given that horse shows are generally situated somewhere out in a muddy field, it’s little wonder that what most journos might consider the basic basics — stuff like phone lines, electricity, and chairs — are often in short supply, and were even more so 15 or 20 years ago, when I first started trekking to these festivities.

There’s a three-star three-day event called the Fair Hill International, which occurs every October in Elkton, Maryland.  (For the uninitiated, equestrian sports, and especially eventing, are ranked in difficulty by the number of stars, ranging from one to four.  There are only six four-star three-day events in the world and they are seriously, seriously badass.  A three-star event is one level below that, but just to put it in perspective, the three-day eventing competition at the Olympics is at the three-star level.)

Fair Hill is a gorgeous place, but given the time of year when the event is held, it’s almost invariably a mudpit.  And the first year that I arrived there to cover it for the British eventing monthly confusingly called “Eventing“, I sunk my rental car to the axles in the parking lot, schlepped through a sea of goo to the centre of activity, and failed to locate anything in the way of a structure that was designated for weary journalistic travellers such as myself.  After a good deal of feckless squishing around the trade fair, I finally located someone with a walkie-talkie, who looked me up and down with wonder and said something along the lines of, “Wow, we have PRESS!”

Okay, so safe to assume there’s no internet access, then …

The 1999 Pan Am Games, in Winnipeg, wasn’t much better.  While most of the competitions were very well-organized, the equestrian events were orphaned out in Bird’s Hill Park, some considerable distance from the rest of the venues and completely off the organizing committee’s radar.  Once we had visited the main press outlet in a huge urban convention centre, and claimed our oversized plastic press passes on lanyards, we were on our own.  We soon discovered that, in all the excitement of erecting dressage rings and building cross-country courses and battling the world’s largest and most aggressive squadrons of mosquitoes, that no-one had really factored in the presence of press out at Bird’s Hill.

Not only was there no press tent, there was no food.  The only fast-food truck was back in the stabling area, where we lowly journos were forbidden to venture.  (I nearly got my foot run over by an overly-aggressive security person in a Gator, when I suggested that it might be nice if someone brought all of us out some peameal sandwiches.  Sheesh.  Give some people a badge and a radio, and they become megalomaniacs.)

By day two, we were all doing rock-paper-scissors-lizard-Spock as to who got to do the Tim Horton’s runs (about 30 km from the park), and by day three, the delightful woman who had been organizing the feeding of the many, many volunteers it takes to run equestrian events at the Pan Am Games, started making all of the journalists and photographers extra sandwiches in brown bags.

Honestly, it was just about the sweetest thing I’ve ever seen.  And she got us Pan Am shirts and hats too.  I still have the hat somewhere.

At the other end of the press tent spectrum is Spruce Meadows, the showjumping Mecca in Calgary.  I haven’t had the pleasure of covering all that many tournaments at Spruce Meadows, but they can invite me back anytime.  Not only is there a climate-controlled press centre with every desired amenity from closed-circuit tv (should you not desire to look out the picture windows at the ring) to a scrum area, printers, and (gasp) flushies … but for the journalists covering the big weekend classes with the million-dollar sponsorships, they actually wheel in steam tables laden with prime rib, shrimp, three veg, and desserts.  Plus china plates, linen napkins, and cutlery.

For journalists habituated to subsisting on potato chips, purchased three days earlier at a gas station and crushed into powder in one’s backpack, this isn’t just a pleasant meal, it’s an absolute revelation.

And by now, you’re probably coming to one very important and correct conclusion:  a fed journalist is a happy journalist.

It’s true.  We are simple, simple creatures, easy to lull into a state of contentment.  Again, it’s possible that this is all standard practice in other arenas of sports journalism, but I, for one, never ever take it for granted.  Mostly because it’s far more the exception than the rule, and one can’t even really assume that because it was offered one year, it will be offered another.

Take another three-star three-day event, called the Foxhall CCI***.  It required a flight to Atlanta to get to this one, but when it was launched, with much fanfare, by a local polo guy with deep pockets who committed to a 20-year run and huge (for eventing) prize money, we footloose freelancers were all intrigued.

So I land at the Atlanta airport, walk about 30 miles from concourse to concourse, claim my little rental car and navigate

my way to the showgrounds, which is out in a communications dead zone where no cel phone comes out alive, about half an hour from Atlanta.  I am weary, I am grumpy, and I drag my laptop and cameras to a tent labelled “press” …. where I am immediately handed a huge plate of fried chicken and biscuits, and asked, “Red or white?”

Unfortunately, the exceptional hospitality at Foxhall didn’t last.  By year three, someone in accounting had cancelled just about all of the perks first showered upon the journalists, and had instituted box lunches that we could purchase for $8 apiece.  (And they were egg salad.  Yecch.  If egg salad were the last food on Earth, I would starve to death rather than consume it.  It’s just revolting.)

By year five, there was no press tent at all … just a power outlet that myself and the one other remaining freelancer who turned up, located up by the stables and took turns using to keep our laptops going when the batteries started to run low. The tycoon had apparently made some unfortunate business deals and was flat outta money.  The show lost its sponsorship and was unable to secure another one.  Needless to say, that 20-year deal failed to be honoured.

I don’t miss schlepping all the way to Atlanta, but man, that fried chicken was exceptional.

Truth is, however, we don’t attend horse shows for the food.  (Well, except for Fair Hill, which features amazing crab chowder in styrofoam bowls.)  We just want to write a good story about the action, and we’re prepared to make some sacrifices to do so.   My expectation, these days, is for a wobbly table and a plastic chair set under a leaky, drafty tent. If there’s a power outlet and internet access, all else is gravy.  And let’s face it, wi-fi, phone lines, and hydro are all fairly recent expectations.   Horse show grounds, historically, have not been the easiest places with which to provide these luxuries.  I get that.

Even Bromont, another three-day event site which once hosted the equestrian events at the 1976 Montreal Olympics and thus boasts a large, permanent grandstand, had zero in the way of power outlets or wi-fi available to the press last time I was there.  I had to beg a corner of the scorer’s trailer because I was filing daily reports for a website … where I was relentlessly entertained by an Equine 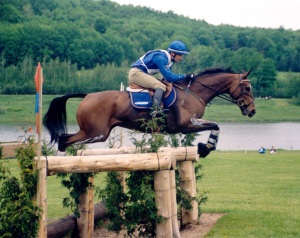 Canada official who was drunk as a skunk, and getting increasingly belligerent, as she added up the scores.  Incorrectly.  Par-tay.

I know I’m not the only intrepid girl reporter who remembers huddling in a leaky tent at Rolex, the feet of my plastic chair sinking into the wet grass, clutching the edges of the garbage bag protecting my laptop from the elements, mentally begging the dial-up to work, and never once thinking, “I could have been a civil servant and worked in a nice, beige, upholstered cube farm somewhere.”

Thankfully, the Kentucky Horse Park was selected to host the World Equestrian Games in 2010, so its press tent set-up received gradual upgrades in the lead-up years, culminating in the whole business being moved indoors (indoors!) to a roomy space overlooking one of the indoor arenas.  With plumbing and all.  Now, all I have to kvetch about is that the windows give a tormenting view of the trade fair below, which I have neither the time nor the cash to peruse.

Many of my colleagues have trekked around the world to cover Olympic Games and World Equestrian Games and are more familiar with the scale of the press centres attached to these events than I; again, alas, not having a surfeit of Air Miles at my disposal, I have had to sit most of those out.  But the Kentucky WEG did give me a taste of the possibilities, without the associated hassles of passport-carrying.  (Though I did get various versions of pat-downs every dim early morning as I entered the park with my gear.)  Yes, it was a tent, but it was a tent designed for 1200 people, with an attached interview tent and a designated cafeteria just fer little ‘ol us.  (Overpriced, to be sure, but handy nonetheless.)  We had flatscreen TVs so we could watch the action in multiple arenas, we had Canon set up on-site with its IT guys, and my particular circle of acquaintances seemed to have a knack for winning the Rolex door prizes of bottles of champagne, by correctly guessing the nightly leaders on the scoreboards of the eight different equestrian disciplines we were all trying to cover.

I think champagne tastes particularly festive when sipped from a paper cup.

13 thoughts on “Mud, Mosquitoes, and Mayhem”